007: The World Is Not Enough was the second and final James Bond game for the Nintendo 64. The first-person shooter received mixed reviews by critics, although typically was considered superior to the PlayStation game. 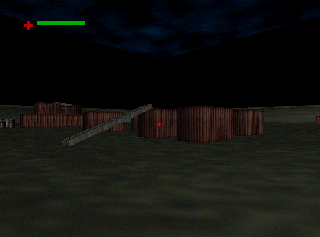 A rectangular level with a broken sky that is empty apart from a large amount of crates. It looks like a multiplayer level, but whether it was meant to appear in the game or whether it's just a test room is uncertain. Use the code to appear here upon selecting a level.

A level that consists of a tower, as well as a large cave, somewhat reminiscent of the Caverns level in GoldenEye 007. Use the following code and press L + R while in the main menu (since you die if you fall down into the cave, use the inbuilt moonjump code to safely get down):

Judging by the level's start at the top of the tower (where "Fallen Angel" left off), this mission was probably intended to be placed between "Fallen Angel" and "A Sinking Feeling." For whatever reason, it wasn't finished and was left out of the game. This might also explain why the Mission Select screen has an uneven grid of 14 missions instead of 15, which would make 3 even rows of 5 missions for each line.

While not unused in itself, using the GameShark code below lets you access a playable version of the Castle Thane island that appears on the cutscene after completing the mission Underground Uprising, where the camera shows a short aerial preview of the island, which is between the cutscene where Bond tried to reach the female assassin who was trying to escape on an aerostatic balloon, and the cutscene where Bond and M talk about Renard's return.

After enabling the cheat, select any mission, and you will enter the Castle Thane map. Bond's spawn point seems to line up exactly with where the camera starts in the actual cutscene, so it's likely that Bond/the player is used as the "camera" for the area. It's unknown why the "map" has so much collision to begin with however.

The map itself is a flat ocean area with Castle Thane itself in the middle, the island of which has glitchy collision. The only solid areas from the island are the small tunnels below the "bridge" from the right. There is also some broken water textures on obscured areas by the island, but there are invisible walls outside the water so Bond won't go out of bounds. Despite this, there are some areas where Bond can walk on seemingly nothing, since the water ends at a certain point. It should be noted that when selecting any mission with harder difficulties than Agent, Bond will spawn stuck underwater, locking up the game.

An unerathed TWINE prototype reveals that at one point a level very similar to GoldenEye's frigate was set to appear, possibly as a multiplayer level.

A hidden leftover debug feature allowing you to view all of the cinematics in the game can be accessed and seen below. Unfortunately, all of the text in this menu is stripped from the game. You will have to count the number of times you press down in this menu and remember where you left off.

With the above code on, press L+A simultaneously at the main menu to access it. 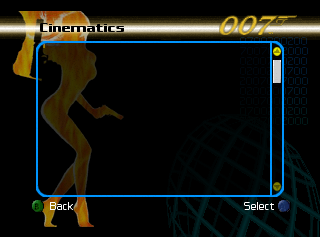 Cutscene order from top to bottom (numbers correspond to how many times you need to press down):

Looking at this code, there was a planned password system for this game. Executing this is defunct.

With the above code on, press L+A at the main menu to access it. 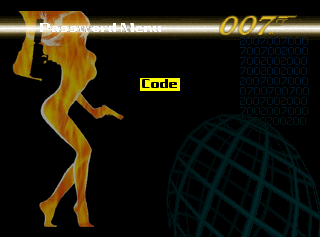 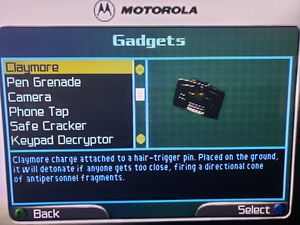 Using the "All Gadgets" Gameshark code, some (unselectable) unused items appear in the Gadgets menu, including a "Claymore" that's not found anywhere in the game, and a mispelled "Keypad Decryptor."

The game uses high (for the Nintendo 64) resolution 64x64 textures, with 8-bit color depth. However, these textures are applied to surfaces at too low a proportion, so at closest distance they appear using their second level mipmap - a quarter of their normal size - in-game.

All text in the European version was updated to use British English spellings instead of American English.

There is a rusty yellow dumpster in the beginning area in the US version. It was removed from European releases for unknown reasons.