The classic Nintendo 64 game was slated to receive an HD remaster in 2007. It reached a beta stage, mostly complete barring bugfixes and polish, before issues with at least one of the other stakeholders in the original game (Bond rights holders Danjaq, MGM, and EON? Original publisher Nintendo? The actual MI6? It changes with every telling of the story...) resulted in the project's silent cancellation. Shortly thereafter, it was discovered on PartnerNet, the internal development/test version of Xbox Live, and its existence was made known to a world that would never be allowed to play it.

...until February 2021, when a build of the game was leaked online by a group calling themselves Fyodorovna, after Natalya Simonova's middle name.

In 2022, a port was announced for Xbox One. In addition, the original N64 version is set to be simultaneously rereleased on Nintendo Switch Online. 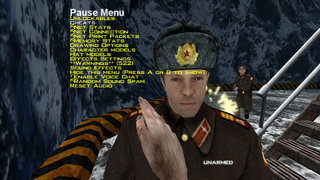 As suggested by the scene .nfo file included with the prototype's release, a debug menu can be enabled by setting 0x82189F2B to 00. A patch file for the Xenia emulator to use can be found here - just set the Debug Menu patch's "is_enabled" property to "true" using a text editor.

Upon being enabled, pressing LB will toggle the debug menu, which you'll immediately notice looks very different from the one in the original N64 game. While enabled, the game is frozen. Use the left stick to select entries, A to select or toggle, and B to go back.

Enables specific cheats mid-game, replacing the button codes from the N64 original. Some cheats are only in this menu.

Draws a print out of the game's memory usage on the screen.

Provides a list of character models that can be toggled. You can only have one enabled at a time. When enabled, all AI will use this model on the next level load. Some models, like the HeadBrosnan ones, tend to crash the game.

Provides a list of hat models that can be toggled. You can only have one enabled at a time. When enabled, all AI will wear this hat on the next level load. Some results seem to be unexpected (i.e. wearing a head as a hat).

These all have minimum and maximum values when using the Left Stick, but you can press A to keep going past the maximum.

Displays a page of warnings, largely illegible due to there being so many (usually around 525) that they all overlap each other.

The majority of these are models with skeletons that don't contain optional bones. (For example, guns can optionally have "cartridge", "flash", "finger", "slide", and "muzzle" bones. The slappers/"fist" has none of these, and so causes 10 warnings: 5 from its original model, 5 from its remastered model.)

Hide This Menu (Press A or B to show)

Toggles playing a random sound every few frames, resulting in an unholy cacophony.