From The Cutting Room Floor
< Help:Contents
Jump to navigation Jump to search

We have very specific requirements that all screenshots must meet. This page exists for those who aren't sure about taking screenshots of various system games.

PC games can run at multiple resolutions, so it's best to find the native resolution which involves no scaling or stretching. Ripping image assets may help.

As buttons and text is commonly scaled such as on menus, it might be different to in-game screenshots, so switching between multiple resolutions may be required.

The correct resolution depends on the game (and newer systems may allow changing the resolution mid-game).

Obviously, the TV Type setting must be on "Color" when taking screenshots.

It should be noted that the Jaguar's internal resolution seems to vary per game. This can be seen with screenshots taken with MAME.

With a modded Xbox that either has been flashed with a devkit BIOS or using Phoenix BIOS Loader, and the SDK installed on a virtual machine running Windows XP or lower, you can use its Screen Capture functionality to grab a screenshot of the connected Xbox. It's stored in My Documents\My Pictures with named after your Xboxes IP address and a sequential number, e.g. 192.168.0.24-image0.bmp.

On a Xbox One, use the capture feature to take a screenshot of the game you are currently playing, and transfer it using OneDrive.

Note: Not every Xbox game is compatible to be played on the Xbox One yet.

Running a game with the Freestyle 3 dashboard, you can press START + BACK to take a screenshot at its internal/native resolution. The screenshot will be saved in Hdd1:\%Freestyle Dash Location%\Plugins\UserData\%TITLE_ID%\Screenshots\%TITLE_ID%%DATE_TIME%.bmp along with a .meta file that has some additional information about the screenshot.

Note: it is NOT recommended to use Xbox 360 Neighborhood like it is for the Xbox, the screenshots it dumps are altered to fit the output image with extra post processing effects, and not the native resolution the game is running at!

On a Xbox One, use the capture feature to take a screenshot of the game you are currently playing, and transfer it using OneDrive.

Note: Not every Xbox 360 game is compatible to be played on the Xbox One yet.

Use the capture feature to take a screenshot of the game you are currently playing, and transfer it using OneDrive.

For the sake of consistency, all users must use the same palette when taking NES screenshots. The officially-sanctioned NTSC palette file can be downloaded below:

Although the Vs. System arcade hardware is NES-based, its games use a variety of different PPUs, some with scrambled palettes, and all with pure RGB output. FCEUX must NOT be used to take screenshots of these games, as its built-in palettes are very outdated and do not match the actual RGB colors. Nestopia, MAME, and Mesen all use the correct palettes; Nestopia will automatically choose an appropriate palette when their "Palette" setting (described above) is set to "Auto". For Mesen, ensure that "Use this palette for VS System games" under the "Palette" tab mentioned above is unchecked.

NES screenshots should be 256×240 pixels, regardless of region. Many emulators crop eight rows of pixels from the top and bottom when running in NTSC mode, so be sure this is not the case before taking your screenshots.

Nintendo 64 games render at many resolutions, however most plugins scale this to a chosen window resolution.

Download the latest version of angrylion-plus.dll from here and place it in Plugin\GFX. Open Project64 and click on Options > Configuration > Plugins. Under Video (graphics) plugin, select angrylion's RDP Plus. Untick Graphics HLE and click OK. Now click Options > Graphics Settings. Under Compatibility, select Slow, few glitches and under Output mode, select Unfiltered and then click OK (you can optionally enable Multithreaded rendering to improve performance). Now when running a game, press F3 to take a screenshot. Screenshots are saved in the Screenshots folder as .BMP images, so they'll need to be converted to .PNG images using an image editor.

While the game is running, click Tools > Capture Screenshot to take a screenshot. By default the screenshot will be saved in the same directory as the ROM.

Certain games can output in a "hi-res" mode. Doing so may require the Expansion Pak, and may need to be enabled in an options or cheats menu in-game. Here is a non-exhaustive list of N64 games that are known to support the "hi-res" mode:

(This method doesn't seem to work with games that need to use the Expansion Pak, but further testing is needed for verification.)

The image will not be grabbed until "Save" is selected from the dialog box.
The N64 will freeze momentarily while the VRAM is dumped.
The file will be saved as a BMP.

GameCube and Wii have resolutions which can vary greatly based on system settings and even from game to game. European-region Wii consoles can be set to run in 50Hz 576i, 60Hz 480i, or 60Hz 480p, while North American Wii consoles support the latter two only. In general, 480p should be considered the optimal mode for capturing screenshots on hardware.

Download the newest available development build of Dolphin. By default, Dolphin will capture screenshots in the user's selected resolution rather than the game's native one. To set the emulator to use native resolution, click on Graphics icon. Under the General tab, make sure "Start in Fullscreen" and "Render to Main Window" are disabled. Disable "Enable Dual Core (speedup)" Enable "Auto-Adjust Window Size". Under the Enhancements tab, set Internal Resolution to "Native (640×528)" and make sure Anti-Aliasing and Anisotropic Filtering are set to "None" and "1x" respectively. Uncheck "Force 24-Bit Color" in the boxes below. Then, under the "Advanced" tab, enable "Dump at Internal Resolution".

Finally, click on Options and select Configuration and under the Wii tab, set the Aspect Ratio to 4:3. If the game renders in widescreen regardless (i.e. has noticeable black bars), set it back to 16:9. This is mainly relevant for late-era Wii games like Skyward Sword and Metroid: Other M.

A few GameCube games make use of the font present in the IPL to render their text. This requires placing an IPL file to the "GC" folder of Dolphin. Refer to Dolphin Wiki for more info.

When emulating Japanese Wii games, some text elements may not appear unless the system language is set accordingly. Click on "Options and select "Configure". Under the Wii tab, set the System Language to Japanese.

There are several methods of taking screenshots directly on the GameCube/Wii hardware. These all require the user to be able to launch homebrew software on their system, instructions for which are outside of the scope of this document.

Use the latest available build of Cemu. Ensure settings in Options > Graphic packs are NOT enabled for your game. Pressing F12 will generate a screenshot matching the game's rendering resolution. Holding the Tab key will toggle GamePad display and pressing F12 will then take screenshots of the GamePad in its native 854×480 resolution. If obvious graphical errors are present in the game due to inaccurate emulation, refrain from using Cemu for it.

Please note that the following method produces screenshots in JPEG format at 1280×720, regardless of the game's actual resolution. Screenshots taken this way must be marked with the {{replaceimage}} tag so that they can be replaced in the future.

The Wii U can upload screenshots from its built-in Web Browser. To do this, press the Home button in the middle of a game and choose the Web Browser. Navigate to the file-hosting site of choice and choose to upload a file. The browser will automatically allow you to select a screenshot of the suspended game's current state, either the top screen (main TV) or the GamePad screen.

Due to the web browser's limited resources, most websites like Google Drive are unreliable and will often fail to load. Dropbox seems to work best with this feature; however, you need to choose the basic uploader in order for the prompt to appear.

The Switch is capable of outputting at either 1280×720 or 1920×1080. Lossless screenshots taken at either resolution are fine, so long as you don't mix and match both resolutions in the same article (e.g. when doing image comparisons).

Here's the last public, but difficult to find, version of VBJin that allows you to split the screens:

Red Dragon should not be used because it produces inaccurate color screenshots.

Both screens combined: 256×384* pixels. *If the game is played open-book style, the image may be rotated, swapping these values.

1. 24-bit as opposed to the 18-bit that the image is downgraded to when displayed on the actual DS screen, as the former is good for comparing with pre-release screenhots (taken with dev hardware like the Nitro Capture) and ripped graphics. 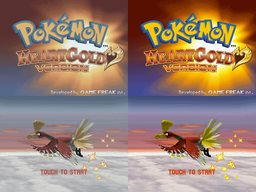 Nintendo 3DS screenshots are taken at 400×240 pixels for the Top Screen and 320×240 pixels for the Touch Screen. In 3D mode, the 3DS produces two 400×240 pixels images, one for each eye in order to show depth when viewed on the system's screen. Screenshots should be taken in 2D mode for a lack of a better way to see them on other devices and for the sake of consistency. (*If the game is played open-book style, the image may be rotated, swapping these values.)

Both screens are preferred, however if the other screen is completely white or black, it can be excluded.

ePSXe should not be used because it produces inaccurate screenshots.

Note: Half-height/Half-width images must be pixel resized to double height/width using nearest-neighbor interpolation, and then resampled to a 4:3 ratio using Lanczos resampling:

Press Triangle to enter "Game Menu" on the game you wish to take a screenshot of. In "Game Settings" make sure "Mode 3 - Unhook Syscalls" and "Mode 6 - Disable IGR" are set to Off. Then in "Configure GSM" set "Enable GSM" to On. "VMODE" shouldn't matter as it dumps the original image from the frame buffer regardless of what it is set to, but if the image is shifted too far off your TV, adjusting H-POS and V-POS can help. After all that, press "Save Changes" and load the game by pressing Cross.
When in-game, a screenshot can be taken by pressing L1 + L2 + R1 + R2 + Up. It'll start dumping the current frame stored in VRAM, as well as create a text file with some details about the screenshot.
Inconveniences:

Neo Geo Pocket/Color runs at 160×152 resolution. Be cautious of emulators (or versions thereof) that only do 160×144, cutting 8 pixels off of the bottom.

Note for NES: Palette (see NES, above, for download link) may be applied under "NES > Graphics Settings" and clicking "Browse" at the lower-left corner. Resolution can also be fixed by setting "Clip Top and Bottom" to False. An NES ROM must first be loaded to access these.